Asselborn: “Europe has no Plan B for Iran”

Luxembourg’s foreign minister Jean Asselborn about EU sanctions against Iran and the future of the nuclear agreement. 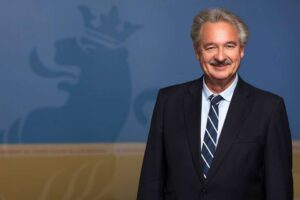 Born on 27 April 1949 in Steinfort, Jean Asselborn has been Luxembourg’s chief diplomat since 2004.

During the period from 2004 to 2013, he was acting as Luxembourg’s deputy prime minister under then-Prime Minister Jean-Claude Juncker.

Jean Asselborn is the longest-serving foreign minister of the 27 EU member states.

Mr. Asselborn, the protests against the Iranian regime have been ongoing for weeks, the European Union has now imposed sanctions.

At EU level, restrictive measures against certain individuals and entities have been in place since 2011, in light of the devastating human rights situation in Iran. These include, for example, the freezing of funds held in the EU and an entry ban for the persons concerned. At the Council of EU foreign ministers in Luxembourg on Monday, we decided to add another eleven individuals and four Iranian entities to that sanctions list because of the role they have played in the brutal repression of peaceful protests. Among them is the country’s minister of information. This was a first step, but I’m afraid it will not be the last.

What can and what should the EU do?

One thing is clear: Our means are limited. Public expressions of solidarity with the overwhelmingly young protestors in Iran are important, but they have a limited impact. We have appealed to the Iranian government to immediately end the brutal repression. The first sanctions have already been adopted and more will probably follow. We are walking a fine line there: If we interfere too much from the outside, our actions could be counterproductive. The Iranian government is already claiming that the protests are a terrorist campaign waged from outside the country when actually this is merely about young people wanting to live their lives freely. 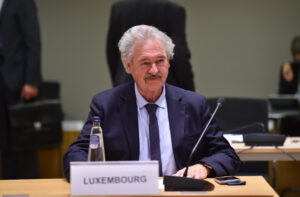 Has the EU changed its attitude towards problematic regimes like that in Iran as a consequence of Russia’s attack on Ukraine?

“Problematic regimes” do exist everywhere in the world, and sanctions are certainly not a panacea. However, I can only think of two countries that play an important role in Russia’s illegal war of aggression against Ukraine: Belarus and Iran.

The Iranian government vehemently denies this, but at the EU Council meeting on Monday, Ukrainian Foreign Minister Kuleba was connected via video conference from a bunker in Kyiv, while outside – as he told us – Iranian kamikaze drones were exploding. It is important not to jump to conclusions and to gather the necessary evidence, but one thing is clear: If it is proven that Iran supplied kamikaze drones to Russia after 24 February, there will be further sanctions. 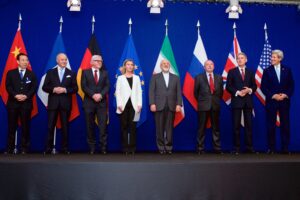 Do you think that a return to the 2015 nuclear agreement (JCPOA) is still realistic in this situation, and if not, what is the EU’s “Plan B”?

There is no “Plan B”. Currently, we have little reason for optimism, even though I don’t want to give up hope. The alternative to the JCPOA is a nuclear Iran. That is why we must do everything we can to get this agreement back on track.

Can you imagine that the economic sanctions against Iran that existed before 2015 will be reintroduced?

In practice, such sanctions were reintroduced back in 2018, by then-US President Donald Trump. It should be borne in mind that economic sanctions punish the entire Iranian population for the crimes committed by a small minority. That cannot be in the interest of the young Iranians who demonstrate against this minority every day.

According to media reports, the Iranian government has threatened the 27 EU states with the severance of diplomatic relations if sanctions are adopted. Can you confirm this, and if it is true, how is Luxembourg dealing with it?

There was no talk of breaking off diplomatic relations. However, the Iranian foreign minister made it clear to us that in the event of new EU sanctions, a counter-reaction from Iran is to be expected. It is therefore even more important that the EU foreign ministers have sent a clear signal on Monday.

The Foreign Minister of Luxembourg was interviewed by Michael Thaidigsmann.