Will the plan now outlined by the European Commission affect EU relations with China?

On 14 September 2022, the European Commission presented a proposal aimed at banning the import of products into the EU made with forced labour. It was seen first and foremost as a measure to tighten the rules for products coming from China. Beijing has been accused of treating the Uyghur minority in the Xinjiang province as forced labourers.

Commission President Ursula van der Leyen had pledged in September 2021, in her State of the Union address to the European Parliament, to ban the trade in products of forced labour. One year later, the Commission presented a draft regulation which, if adopted, would grant EU member states the power to investigate companies and states suspected of relying on forced labour.

The Commission said it preferred a “non-discriminatory approach” to the forced labour issue in line with, as the Financial Times reported, World Trade Organization rules on non-discrimination. Therefore, EU Commissioner Thierry Breton didn’t mention the thorny subject of the Uyghurs but stressed the link to a value-based trade policy. “Being industrial and technological leaders presupposes being more assertive in defending our values and in setting our rules and standards,” he said.

The mechanism targets any potential actors of forced labour, i.e. both European and non-European companies, and this at any stage of “production, harvest or extraction and to all products, of any type, including their components” the paper said. Moreover, both EU member states and non-EU countries can be subject to an investigation. The Commission said a public database would be created, in which both sectorial and geographical risks would be clearly identified. 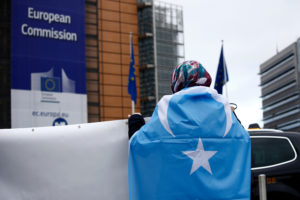 Brussels, Belgium. 5th Feb. 2019. Activists protest the treatment of Uyghur Muslims by Chinese authorities in Xinjiang province at a protest outside the headquarters of the European Union. Alexandros Michailidis/ Shutterstock.com

Under the plan, the product prohibition process would be carried out in two stages. “In the preliminary phase, the authorities assess if there are well-founded reasons to suspect that products have been likely made with forced labour. If they determine that there is a substantiated concern of forced labour, they will proceed to the investigation phase,” according to a statement by the Commission.

The EU executive said it had decided to employ a risk approach, which “means that they should focus their enforcement efforts where they are likely to be most effective, namely on the economic operators involved in the steps of the value chain as close as possible to where the risk of forced labour is likely to occur.”

The second step would be an investigation by the member state authorities, in cooperation with the third state or the company concerned. The Commission said it was aware that international cooperation could be an obstacle to any investigation. For this purpose, the regulation would allow a member state to reduce the level of proof required, without defining a minimum threshold.

As per a report by the International Labour Organisation from 2021, 27,6 million people worldwide were subjected to forced labour. The EU, in view of the emergency of the situation, said had no time for a “fully-fledged” impact assessment.

Even if Uyghurs are not mentioned by EU officials or in the proposal itself, it is clear that this was the issue that prompted EU authorities to move towards a ban on forced labour products.

From the point of view of the World Uyghur Congress, a representative body of Uyghurs, the proposal of the Commission does not go far enough. “The proposal does not preclude banning an entire industry from a region, and the procedure seems to have been drafted to target individual entities. This will weaken the instrument and make it more difficult to adequately respond to instances of state-imposed forced labour.” said Koon Stoop, the EU representative for the WUC.

Nevertheless, Stoop acknowledges that the proposal “is a welcome step as a regulation ensuring uniform application, and clearly renders forced labour products illegal. But still, it seems to have some serious flaws that need addressing for it to be really effective to address Uyghur forced labour.”

The EU is one of the biggest trade partners of China. The possibility in the hands of member states to ban some products could have a serious impact on EU-China trade relations. Given the context of instability caused by the war in Ukraine, China occupies a central position. On the one hand, even if Beijing seems to be close to Moscow, its support is mainly through words and less through actions. On the other hand, Beijing is still in an already long-time trend to open up to the world, keeping good relations with the West and especially the EU. Maintaining China as an important trade partner is an asset from their point of view.

How risky will the new instrument be for Europe? Will it undermine the EU-China relationship at a time when allies seem important? It seems that the Commission at least believes this will not be the case.

The Commission’s proposal was welcomed overwhelmingly in the European Parliament. However, Saskia Brickmont, a member of the Green/EFA group, said it did not go far enough. “What the Commission is proposing here is a system of withdrawing these products from the market only after a complaint has been lodged, an investigation has been carried out, and a high level of proof has to be provided… The problematic products are therefore still allowed to enter the European territory! The procedure can take time, so the goods are not removed from the market immediately with consumers continuing to buy them.”

Raphael Glucksmann, a French MEP and long-time advocate for the rights of the Uyghurs, said he was pleased to finally see concrete action from the EU, calling the draft regulation a “crucial step in our joint fight against modern slavery and the multinationals that benefit from it. It marks an undeniable step forward”.

The Liberal group in the Parliament welcomed a proposal “that is compatible with the World Trade Organization (WTO). This was an important liberal demand in the European Parliament.”

The proposed regulation will still need to be approved by the Council (i.e. the EU member states) and the Parliament and could still be modified. It would give new powers to member states and allow them to force economic players, be they companies or states, to comply with the imperatives of the European Union.