The EU considers how to react to Iran’s violent crackdown in the wake of Mahsa Amini’s death.

The European Union will “continue to consider all the options” with respect to Iran. This rather cryptic message was included in a statement issued by High Representative Josep Borrell ahead of the Foreign Affairs Council meeting scheduled for 17 October.

The response by the Iranian authorities had been “disproportionate and resulted in the loss of lives as well as a large number of injuries.” Borrell went on to state: “For the European Union and its member states, the widespread and disproportionate use of force against nonviolent protestors is unjustifiable and unacceptable. People in Iran, as anywhere else, have the right to peaceful protest. That right must be ensured in all circumstances.”

Unbelievable scenes from #Tehran: a woman standing on a car, wearing western clothes, takes off her hijab and waves it in defiance at #Iran's religious police.#MahsaAmini #IranProtests2022pic.twitter.com/iFs14IhXl7

The declaration came as civic unrest and demonstrations continue to rock Iran following the death of Mahsa Amini, a 22-year-old woman that was detained by Iran’s morality policy over a supposed violation of the Islamic Republic’s conservative dress code.

Protests spread like wildfire after Amini’s death on 16 September, and the harsh response by the Iranian authorities resulted in more than 70 people being killed and hundreds injured, reports the Norway-based Iran Human Rights NGO. The Iranian authorities have now severely restricted internet access and blocked instant messaging applications in an attempt to suppress freedom of expression and the flow of information and in order to dispel the unrest.

What is happening in the Islamic Republic of Iran?

“Mahsa Amini is one among countless victims of the Islamic Republic’s war on women,” explained Hadi Ghaemi, executive director of the Center for Human Rights in Iran (CHRI).

Amini was detained on 13 September by the morality police on the grounds that she did not wear a headscarf (hijab). The authorities say that she suffered a heart attack while being held in a so-called “guidance centre”, a type of reeducation facility where women are told how to dress in public.

The news of the young woman’s death stirred massive outrage against the morality police, the government’s repression of women and restrictions on personal freedoms in Iran, which has been an Islamic republic since Ayatollah Ruhollah Khomeini took power in the Islamic Revolution in 1979. Protests started in northwestern Iran before spreading around most of the country.

Iran’s President Ebrahim Raisi vowed to deal with the protestors “decisively”. Meanwhile, women of Iran are taking off their hijabs and cutting their hair during the protests in a show of defiance of the country’s religious dress code.

Earlier this month, family members of four EU citizens currently detained in Iran appealed in an open letter to Borrell to do more to secure their release from captivity. 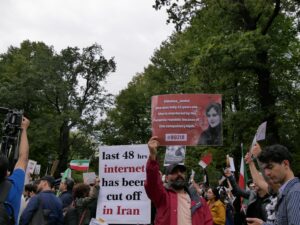 Is the EU going to use the “European Magnitsky act” on Iran?

Expressing his direct and unequivocal support for the protests in Iran, the Crown Prince of Iran Reza Pahvali, who lives in exile, called on the EU to use the “European Magnitsky sanctions on regime officials”.

Adopted in late 2020, the instrument allows for the European Union to sanction individuals, organizations, and all state or non-state actors held “responsible for, involved in or associated with serious human rights violations and abuses worldwide.”

Under this mechanism, the EU can implement restrictive measures. They include travel bans, asset freezes, and prohibitions for entities and individuals from the EU to make funds available to those under sanctions. So far, under the human rights sanction regime 15 individuals and 4 entities have been placed under restrictive measures. These include people held liable for the arbitrary detention of Uyghurs in China and North Koreans responsible for the repression in that country.

Following my proposal, the @EPPGroup will request an urgency resolution about the #IranProtests to be debated and adopted in the #EPlenary next week. The @Europarl_EN should send a strong message: We support the Iranians' peaceful efforts in pursuit of human rights and freedom❗️ pic.twitter.com/HhYLocl5I0

Germany’s Foreign Minister Annalena Baerbock on Monday called for sanctions on Iran for suppressing women’s rights and using deadly force. “We will now have to talk very quickly in the EU circles about further consequences, which for me also includes sanctions against those responsible,” she said, adding that “the attempt to now suppress peaceful protests with even more deadly force must not go unanswered.” Baerbock did not go into further detail.

So far, the Magnitsky Act has not been used with respect to Iran. Some are calling on the EU to do so now. However, slapping sanctions on officials in Tehran could further jeopardise the chances for a negotiated return of both the United States and Iran to the JCPOA nuclear agreement of 2015. The EU has mediated 5+1 talks in Vienna which started last year and concluded in the summer with still no agreement yet in sight.

Iran’s influence in the Western Balkans

The Iranian government’s actions abroad have also drawn heavy criticism. On 15 July 2022, Albania – a NATO member and a candidate for EU membership – was hit by a significant cyber-attack that both Tirana and Washington blamed on Tehran.

Albanian Prime Minister Edi Rama announced the severing of diplomatic ties with the Islamic Republic over the cyber-attack and said it had been intended to wreak havoc on the state’s cyber infrastructure and an attempt to gain access to citizens’ personal information. The attack “threatened to paralyse public services, erase digital systems and hack into state records, steal government intranet electronic communication and stir chaos and insecurity in the country,” Rama said.

⚠️ How do you deal with an authoritarian regime threatening imprisoned EU citizens with the death penalty?

Outraged families of EU citizens imprisoned in #Iran are asking the 🇪🇺 #EuropeanUnion to uphold its values and protect human rights.https://t.co/VWT0dpmWPD

NATO issued a statement of solidarity and condemned Iran’s “malicious cyber activities.” The European Union also issued a declaration, expressing “full solidarity with Albania”. Brussels strongly condemned the cyberattack and said it went “against agreed norms of responsible state behaviour.” However, the EU declaration failed to mention Iran as the perpetrator.

On 9 September 2022, another cyber-attack occurred in Albania – this time targeting the country’s Traveller Information Management System (TIMS) and causing chaos at the borders. “Another cyber-attack by the same aggressors,” said Edi Rama in response.

Iran has already summoned the ambassadors of Britain and Norway over what it called “interference and hostile media coverage” of the nationwide unrest. However, Mahsa Amini has become a symbol of the struggle for freedom of expression and a further cause for women’s rights.

As for the European Union, the key question is whether or not to impose sanctions under the “European Magnitsky Act” as they could endanger the talks to revive the 2015 JCPOA nuclear deal.