Treaty change – or rather not?

The Conference on the Future of Europe produced a number of recommendations – but it is unclear if they will be implemented.

In March 2019, French President Emmanuel Macron first suggested the idea of a Conference on the Future of Europe (CoFoE). This idea was supported by the president of the European Commission, Ursula Von der Leyen, before her election by the European Parliament. After the Covid-19 pandemic struck, the conference was delayed and finally opened on 9 May 2021, Europe Day. It included not only politicians and representatives of EU institutions and member states, but also randomly selected citizens.

After a year of discussion and deliberation, the Conference adopted a total of 49 proposals and recommendations for around 320 individual measures to be taken. They included key topics such as climate change, health, digital transformation, security and migration. 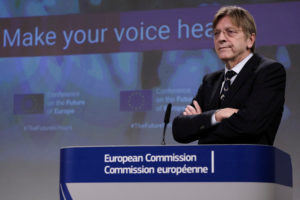 Guy Verhofstadt serves as one of the co-chairs of the Conference for the Future of Europe (photo: Shutterstock)

On 4 May 2022, the European Parliament requested the launch of an official Convention under Article 48 of the Treaty on the European Union (TEU), to discuss treaty changes. This was supported, among others, by Emmanuel Macron, Prime Minister of Italy Mario Draghi and von der Leyen.

On 23 and 24 June 2022, the European Council will discuss the results of the conference and possible follow-up. Already, there is discussion on how far this should go. Several countries have already come out in opposition to far-reaching reforms, arguing that what the EU needs these days is concrete action based on the existing institutional framework.

The novelty of the CoFoE process was that it brought together different player on a continuous basis for a period of twelve months. Hitherto, European Union institutions most often engaged in their own distinct initiatives. The European Parliament, for example, since 2016 adopted three resolutions on ways to improve and reform the EU treaties.

The question of whether or not the EU constitutional basis, the treaties, should be amended in the wake of the conference is controversial. It is evident that smaller member states in particular are opposed to it. Treaty change would however require a unanimous vote by all 27 EU states.

The amendments proposed by the CoFoE include, among others, an end to the unanimity rule in many areas. Unanimity would be replaced by the requirement of a “qualified majority” for decisions in “relevant areas such as the adoption of sanctions” and “in the event of an emergency”. This would indirectly give more powers to EU institutions such as the Parliament or the Commission as no single country would be in a position to stop the EU from adopting potentially far-reaching decisions against their will.

France, Germany, Belgium, Italy, Luxembourg, the Netherlands and Spain are “in principle” open to such changes, as is the European Parliament. However, a bigger number of countries – albeit representing only a quarter of the EU population – has voice opposition to such measures. They include Bulgaria, Croatia, Czechia Denmark, Estonia, Finland, Latvia, Lithuania, Malta, Poland, Romania, Slovenia and Sweden.

These Member States pronounced themselves by the publication of a non-paper in May. They argued that such changes had never been «the purpose of the Conference» and that a Treaty change debate would only distract the EU from more pressing issues.

On 4 June 2022, the members of the European Parliament approved by a simple majority a resolution which urges European Union leaders to convene a European Convention in order to amend the European Treaties. It is unclear if EU leaders will approve that request when they meet in Brussels on 23 and 24 June.

Conference on the Future of EuropeEU Treaties