Two years on: Was the EU’s vaccine strategy effective?

A report by the European Court of Auditors provides some answers, but also criticizes a lack of scrutiny by the Commission.

When the first Covid-19 vaccines were developed and commercialised in the spring of 2020, Western countries were competing hard to be the first to lay their hands on the precious doses. Early on, the European Union decided it would do the vaccine procurement collectively. Negotiations with the pharmaceutical companies were entrusted to the European Commission, but each country retained a say in how much it wanted to purchase.

In June 2020, a joint vaccine strategy was agreed upon. The first contracts were signed with two producers – AstraZeneca and BioNTech/Pfizer – in the fall of 2020, with the first vaccine deliveries arriving in late December 2021. However, early on in 2021, the Commission came under a lot of criticism for its handling of the negotiations.

Other countries such as the United Kingdom, the United States, and Israel were several weeks ahead of the EU in commencing their vaccination campaigns. Moreover, the Commission was lambasted for allegedly not having negotiated a legally water-tight agreement with AstraZeneca after the latter cut back its allocation to the EU countries, citing production issues. The Commission initially refused to publish the full contract with AstraZeneca (only a redacted version was released), but it later leaked. 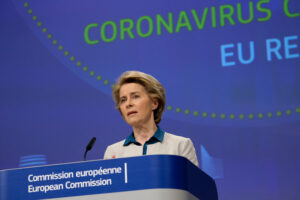 The AstraZeneca case later went to court. In June 2021, a Belgian tribunal issued a ruling that both sides, the Commission and the pharmaceutical company, hailed as a victory.

Nearly two years after the whole saga, the European Court of Auditors (ECA), the independent audit body of the Union based in Luxembourg, assessed the EU procurement of the Corona vaccines. Contracts for 4.6 billion doses worth a total of €71 billion were signed by the Commission. So far, the price paid per dose was not publicised as the contracts with the manufacturers remain classified. However, the total volume ordered suggests a weighted average of around €15.50 per dose.

The ECA report concluded that although the Commission had managed to “secure a diversified vaccine portfolio” for the 27 member states, it had not yet assessed sufficiently the performance of the procurement process put in place, nor submitted the current rules to a stress test.

The performance of the EU vaccines procurement process was not sufficiently assessed, according to our 🆕 special report published today.

👉The auditors also note that the Commission has not yet scrutinised or benchmarked that process to draw lessons for the future.

The auditors found that follow-up contracts with vaccine producers signed in 2021 contained stricter provisions on essential aspects such as delivery schedules than the first ones signed in 2020. The auditors also found that the Commission had limited influence to address supply chain shortfalls or speed up production in the short term. However, they leveled criticism at the Commission for not having carried out a proper assessment of its procurement procedures or a stress test.

“We see an opportunity to consider some of the lessons that can be drawn to better prepare for future pandemics,” ECA member Joëlle Elvinger emphasized. The auditors urged the Commission to conduct an impact assessment – “normally a standard good practice” – and to lay out clear procurement guidelines for future pandemics. It was still unclear which were the lessons learned by the Commissions, Elvinger said.

As part of its assessment, the ECA relied heavily on answers provided by the European Commission. However, one critical piece of information is still missing: What preliminary negotiations took place between Commission President Ursula von der Leyen and the leadership of US company Pfizer in 2020? 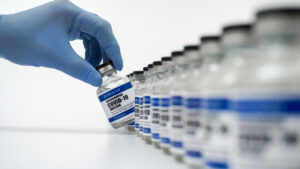 The Commission has so far refused to shed light on this matter and to release text messages exchanged between von der Leyen and Pfizer CEO Albert Bourla. ECA official quipped during the press briefing: “We didn’t even receive an answer on why we didn’t receive the answers”.

In an interview in April 2021, von der Leyen revealed that she had exchanged texts with Bourla while negotiations over a vaccine supply contract were ongoing. However, in a letter to the European Ombudsman in June 2022, the Commission said that a search undertaken by the President’s cabinet for relevant text messages corresponding to the request for access to documents had not yielded any results. The Commission argued that SMS and other text messages do not need to be registered and stored because they are considered “short-lived, ephemeral documents”. However, Ombudsman Emily O’Reilly disagreed strongly and lambasted the EU executive in a statement in July and said this amounted to “maladministration”.

“The Commission’s response to my findings neither answered the basic question of whether the text messages in question exist nor provided any clarity on how the Commission would respond to a specific request for other text messages,” said Emily O’Reilly in a statement published on 14 July 2022. This left the “regrettable impression of an EU institution that is not forthcoming on matters of significant public interest,” she added.