Brussels gets tough with Warsaw over judiciary law

After pressure from the Parliament, the European Commission is taking legal action against Poland

Poland was referred to the European Court of Justice (ECJ) by the European Commission on Wednesday over a law on the judiciary which the government in Warsaw enacted in February 2020. The Commission regards the law as detrimental to the independence of Polish judges and deems it incompatible with the primacy of EU law over national legislation, in particular as the law prevents Polish courts, including by using disciplinary proceedings, from directly applying certain provisions of EU law protecting judicial independence, and from putting references for preliminary rulings on such questions to the ECJ.

In addition, the Commission said Poland was in violation of EU law by allowing the Disciplinary Chamber of the Supreme Court – the independence of which is not guaranteed – to take decisions that have a direct impact on judges and the way they exercise their function. These matters included cases of the lifting of immunity of judges with a view to bringing criminal proceedings against them or to detain them, and the consequent temporary suspension from office and the reduction of their salary, the EU executive said.

“The mere prospect for judges of having to face proceedings before a body whose independence is not guaranteed creates a ‘chilling effect’ for judges and can affect their own independence. The Commission considers that this seriously undermines judicial independence and the obligation to ensure effective legal protection, and thus the EU legal order as a whole.”

The Commission also decided to ask the EU’s supreme court to order interim measures so as to prevent the aggravation of serious and irreparable harm inflicted to judicial independence and the EU legal order. The measures include an order to suspend provisions empowering the disciplinary chamber of the Supreme Court to decide on requests for the lifting of judicial immunity, as well as on matters of employment, social security and retirement of Supreme Court judges. The Commission also requested the ECJ to order the suspension of decisions already taken by the disciplinary chamber regarding judicial immunity, and also the provisions preventing Polish judges from directly applying certain provisions of EU law protecting judicial independence. “We expect the chamber to stop its operations immediately”, said EU Commission Vice-President Vera Jourová on Twitter.

Poland’s law on the judiciary was incompatible with the principle of primacy of EU law, the functioning of the preliminary ruling mechanism and Article 19(1) of the Treaty on European Union read in connection with Article 47 of the Charter of Fundamental Rights of the European Union, which establish a right to an effective remedy before an independent and impartial tribunal previously established by law.

I am deeply concerned about the continued actions that undermine judicial independence in Poland.
Polish judges are European judges and they should do their job without political pressure. We decided to refer again Poland to the @EUCourtPress. https://t.co/kQ3Jreh1Ul pic.twitter.com/kJwK0EdMGq 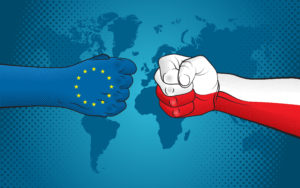 Furthermore, the Commission considers that Poland violates EU law by allowing a non-independent disciplinary chamber to take decisions that have a direct impact on judges and the way they exercise their function. These decisions include the lifting of immunity of judges with a view to bringing criminal proceedings against them or to detain them, as well as the consequent temporary suspension from office and the reduction of their salary. By giving the disciplinary chamber powers that directly affect the status of judges and the exercise of their judicial activities, the Polish legislation jeopardises the ability of the respective courts to adjudicate in full independence and therefore to provide an effective remedy, as required by Article 19(1) TEU.

Finally, the EU executive argues that the Polish law imposes a disproportionate obligation on judges to provide information for the purposes of publication about specific non-professional activities. This was incompatible with the right to respect for private life and the right to the protection of personal data as guaranteed by the Charter of Fundamental Rights of the EU and the General Data Protection Regulation.

The rule of law is one of the fundamental values of the European Union. It is enshrined in Article 2 of the Treaty on European Union. It is also considered essential for the functioning of the EU as a whole, for example, in the area of cooperation on justice matters and to ensure that national judges – who also interpret EU law – can fulfil their role. “National governments are free to reform the judiciary, but while doing so, they have to respect the EU treaties”, said Vera Jourová.

Back in July 2017, the Commission launched an infringement procedure on the Polish Law on Ordinary Courts, on the grounds of its provisions that required an early retirement of judges. At the behest of the Commission, the ECJ issued a ruling in the case, confirming the Commission’s position. In July 2018, the Commission launched another infringement procedure against Poland, this time regarding the law on the Supreme Court. Five months later, the ECJ issued a ruling ordering immediate measures to stop the implementation of that law. In June 2019, the court in Luxembourg said in its final judgement that the Polish law violated the EU Treaty. Subsequently, the government in Warsaw gave in and removed the contested provisions from the statute book.

In April 2019, the Commission launched another infringement procedure on the grounds that the disciplinary regime undermines the judicial independence of Polish judges and does not ensure the necessary guarantees to protect judges from political control, as required by the CJEU. On 8 April 2020, the Court of Justice ruled that Poland must immediately suspend the application of the national provisions on the powers of the Disciplinary Chamber of the Supreme Court. This order applies until the Court renders its final judgment in the infringement procedure.

So far, Poland has not complied with the Commission’s request, though the court case is still pending.

In the European Parliament, the Commission’s move was overwhelmingly welcomed. Vice-President Katarina Barley – a Social Democrat and former German justice minister – tweeted “Finally!” and said it was “high time that the systematic dismantling of an independent judiciary is effectively countered.”