Two countries should be given candidate status and Georgia a “European perspective”.

On Friday, the EU Commission delivered its opinion on the requests by Ukraine, Moldova, and Georgia to become members of the European Union. In the wake of Russia’s invasion of Ukraine in February, the three countries lodged urgent applications with Brussels. Following evaluation of their bids, the Commission now recommended to the European Council, meeting this week, that Ukraine and Moldova be granted official EU candidate status “on the understanding that the country [countries’] will carry out a number of further, important reforms.”

Georgia’s application received a different formulation. The government in Tbilisi was asked to carry out necessary reforms. The Commission said it would then “come back and assess how Georgia meets a number of conditions before granting it candidate status.”

During a visit to Kyiv on Thursday, the leaders of Germany, France, Italy, and Romania expressed their support for Ukraine’s EU candidate status. “The biggest message we want to send in this trip is that Italy wants Ukraine in the EU,” Italy’s Draghi said, emphasizing that “Italy, France, and Germany are here to give unconditional support to Ukraine.”

I commend the positive @EU_Commission Conclusion on 🇺🇦’s candidate status. It’s the 1st step on the EU membership path that’ll certainly bring our Victory closer. Grateful to @vonderleyen & each EC member for a historic decision. I expect the positive result from #EUCO next week.

Reforms and reversibility of the process

Georgia’s case is more complicated than the two and includes stronger wording from the Commission. The Commission asks Georgia to first address the pressing issues in the country – political polarisation, a guarantee of the full functioning of all state institutions, judiciary reforms, and much more – and after that to be granted candidate status. Nonetheless, the Commission recommended a ‘European perspective’ to be granted also to Georgia – on top of Ukraine and Moldova.

France’s push for enhanced enlargement methodology received support from the Council and the Commission which includes “reversibility” in the enlargement process. EU officials stressed the process could be sped up but also reversed in case of a lack of reforms in the candidate countries. This can additionally stretch the enlargement process for all countries on the European path – including the Western Balkans.

Moldova in the shadow of Ukraine?

Moldova applied for EU membership two weeks after Russia’s invasion of Ukraine – joining its neighbor Ukraine, and Georgia in their quest for a European future. Maia Sandu, Moldova’s president, signed an application to join the EU urging that “The Republic of Moldova must have a clear European path. We are ready to do everything needed to achieve this fundamental national goal”.

In a recent policy paper by CEPS, the authors argue that the “Association Agreement (AA) and Deep and Comprehensive Free Trade Area (DCFTA), signed in 2014, can be viewed as already shadowing the accession process to a substantial extent. All the chapters of the enlargement process feature in commitments Moldova has already made in the AA/DCFTA.”

Strong signal of support for #Moldova & our citizens! @EU_Commission has recommended granting🇲🇩 the 🇪🇺candidate status on the understanding that additional efforts will be taken to advance on reforms already started. We’re committed to working hard &count on @EUCouncil’s support.

However, Moldova’s state of preparedness to accede to the EU may encounter some bumps. Transnistria, a breakaway region supported and heavily dependent on Russia, could further complicate the country’s membership prospects. Since Transnistria is internationally recognized as a territory that is part of Moldova but is de-facto “independent”, the process remains unclear, especially since EU member states want aspiring countries to solve their territorial disputes before accession.

Furthermore, during a recent visit to Kosovo, German Chancellor Olaf Scholz’s remarked that “it is not conceivable that two countries that don’t recognize each other become members of the EU”, thus signaling to Serbia that recognizing Kosovo was a prerequisite for EU membership.

“We belong in the European Union. We are a European country” 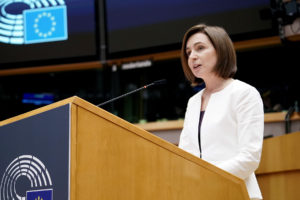 The EP adopted a resolution in early May and urged the European Council to “grant it candidate status, in line with Article 49 TEU and ‘on the basis of merit’”. The Parliament also called on the Commission “to swiftly complete its application assessment and provide Moldova with its full assistance while this is ongoing” On 18 May, Moldova’s President went to Brussels to seek support from MEPs regarding the country’s EU membership bid. Maia Sandu delivered a speech at the European Parliament plenary demanding that the EU take the “right decision”. She said:

[…] We are aware that political decisions at the EU level have to be made. We are also aware that these are not easy decisions. But granting Moldova candidate status is the right decision…. we belong in the European Union. We are a European country, with a European language, a European history, and a European political system.

During a visit to the capital Chisinau on June 15, French President Emmanuel Macron indicated to the government of Moldova that conditions would be part of the package. “We must send a clear message to the Moldovan people and at the same time have conditions that guarantee compliance with the procedures. The answer will be clear, but conditions will be imposed,”.

Decisions at the EUCO summit?

EUobserver talks about an informal Dutch paper advocating a “rigorous” approach to Ukraine’s application with “fair” conditionalities.  The Dutch government expects Ukraine to deliver on a number of key reforms including the “criminalisation of anti-LGBTI hatred” in the Eastern European country.

It is now up to the European leaders to make the final decision on the status of Ukraine, Moldova, and Georgia. A positive decision by the 27 heads of state and government would provide an additional impulse for reforms and strengthen the domestic pro-European voices.