European Commission to strengthen code of conduct against disinformation

Vera Jourová, the European Commission’s vice-president in charge of values and transparency, has presented ideas to strengthen the Code of Practice on disinformation, which is part of the new Digital Services Act (DSA). The DSA and the Digital Markets Act (DMA) are sets of rules to regulate online content and commerce. They specify obligations of digital companies.

In an age where we get our information from online and social media, fact checking was necessary, Jourová stressed. The signatories of the existing Code of Practice are asked to take stronger commitments and respect their engagements. The pact currently has four signatories: Facebook, Twitter, Google and Microsoft. However, none of the companies had fulfilled their best-efforts obligation, although they have reported through an annual self-assessment which shows their actions, but also faults, said the Commission.

Illegal content such as child pornography or incitement to terrorism differs form harmful content, which is disinformation through social media posts, manipulation such as deep-fakes, or hate speech. The goal of the DSA/DMA is not to hinder free speech, but to ensure that the correct information is provided. Consequences of disinformation can influence election outcomes and even put lives in danger by spreading false information on vaccines. The amount of disinformation has exploded recently during the Covd-19 pandemic. 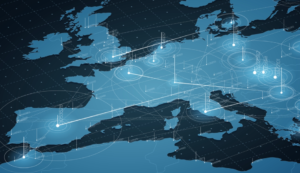 The code of conduct has for objective to set out « a wide range of commitments, from transparency in political advertising to the closure of fake accounts and demonetization of purveyors of disinformation » (Commission communication of April 2018). European Commissioner Thierry Breton deplored a lack of commitment by the signatories, saying that  only one platform had more or less followed its obligations.

Although this code enforces a system of reporting and monitoring platforms, thereby providing for insurance of transparency and accountability of their policies on disinformation, Jourová and Breton stressed the importance of reinforcing the rules, especially with the emergence of smaller platforms. Responsibility was not only reserved for the social media giants but had to be shared by all platforms. More and more smaller providers were emerging and contributing to the spread of disinformation. As such, it was imperative to extend this code not only to major platforms but also smaller operators.

In fact, the latest annual assessment of the Code published in September 2020 shows that the signatories have effectively participated in the reporting and monitoring program in the fight against disinformation which resulted in concrete actions and policy changes.

The Commission said it would continue to monitor the respect of the Code of Practice on Disinformation, hoping for a more effective system to protect the rights of the users and access to information. The new guidance aims to strengthen the Code of Practice on Disinformation whishes to address «gaps and shortcomings and create a more transparent, safe and trustworthy online environment (…) by laying out the cornerstones for a robust monitoring framework of the Code’s implementation. »

Thierry Breton said it was important for platforms to screen for harmful content and for users to recognize disinformation.  The first draft of the updated Code of Practice is to be presented by the Commission in the autumn of 2021 and to be operational by early 2022.