The EU Commission has presented out ambitious plans to reorganise and improve legal migration to Europe.

The plans include proposals aimed strengthening the European economy, cooperation with non-EU countries and overall migration management in the longer term. Specific actions to facilitate integration of those fleeing Russia’s invasion of Ukraine to EU countries are also foreseen.

Annually, between two and three million nationals from non-EU countries come to the 27 member states legally, in contrast to 125,000 to 200,000 irregular arrivals. Overall, an estimated total of 23 million migrants reside in the EU. Ten million of them have long-term residence permits. “The majority are using national permits” and not the EU Blue Card, stressed Commissioner Ylva Johansson, adding that she wanted to change that. “We want to make the EU long-term permits more attractive.”

Today, we are presenting an ambitious plan for legal, orderly migration with a positive impact all round.

Improved conditions for migrants, support to partners and skilled workers for our economies.

The last missing piece of our migration policy. https://t.co/uKdqQH22LY pic.twitter.com/bYgACeYZie

Under the Commission proposals, the minimum period before a permanent residence permit can be issued will remain at five years. It would, however, in future be possible for an applicant to spend some of the time in another EU country, e.g. by switching jobs. Currently, there is often an obligation to stay in the country that took in the migrant for a minimum of five years. Study periods would also be recognised, announced the Commission. In addition, immigrant workers to Europe would be entitled to leave their host country for up to two years and still preserve the right to return to the EU afterwards.

The Commission announced that it also wants reforms to the cumbersome and expensive visa application process, which usually involves people having to present themselves in embassies in person. In future, visa applications could also be lodged online, Johansson said. 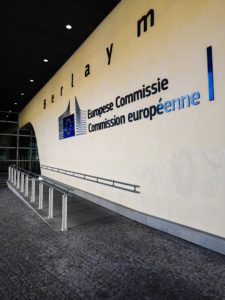 The European Commission headquarters in Brussels

Commission Vice President Margaritis Schinas said: “What we are proposing today is part of an overall framework. We are building a house for migration policy, and this is part of the construction.” Schninas added: “We need a door through which people can enter the house if we want to prevent that they come through the windows.” He said the Commission recognised that legal migration had a positive impact all round: “It gives those who want to migrate an opportunity to improve their circumstances while providing more skilled workers for host countries, who in turn boost the economy for all.”

The proposals would include enhanced rights of long-term residents and their family members, including improvements to family reunification and facilitated intra-EU mobility. Also possible will be for foreign workers to remain in an EU country when laid off by an employer. Short-term periods of unemployment would not lead to a worker losing his residence rights.

The EU executive also proposed to establish a first EU-wide platform and matching tool, a so-called EU Talent Pool, to make the EU more attractive for non-EU nationals looking for opportunities and help employers find the talent they need. To address the urgent need to facilitate access to the labour market for new arrivals from Ukraine, the Commission is proposing a pilot initiative that should be up and running by summer 2022. All measures were elements of a future common EU migration policy. So far, many aspects of immigration are still in the competence of states, including decisions on how many immigrants can come to any given country.

“We’re not talking quotas or numbers, we’re talking of a method to attract talents”, said Schinas at a press conference in Brussels.

Over the past two decades, the EU has developed a legal framework largely harmonising the conditions of entry and residence for non-EU nationals. An evaluation of this framework in 2019 underlined that more could be done to increase legal as opposed to irregular migration. The European Parliament in 2021 asked the Commission to present a set of proposals to facilitate legal migration to the EU with the objective of reducing bureaucracy, strengthening harmonisation, promoting fundamental rights and equal treatment, and preventing labour exploitation.