The EU is tightening measures against Russia and wants to ban the import of Russian oil by the end of the year. 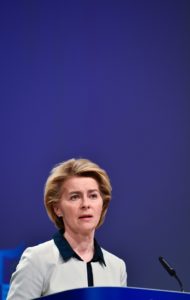 In a speech before the European Parliament in Strasbourg on Wednesday, European Commission President Ursula von der Leyen has announced new severe measures against the Russian Federation, including an end to the importation of crude and refined oil to the EU by December 2022.

With his war on Ukraine, Russian President Vladimir Putin “was sinking his own country, Russia”, von der Leyen told lawmakers. Phasing out the dependency of some EU countries on Russian oil would “not be easy”, she pointed out, but had to be done nonetheless. Von der Leyen promised this would be implemented in “an orderly fashion”.

She also named other sanctions to be imposed on Russia.”We are listing high ranking military officers and individuals who committed war crimes in Bucha and those who are responsible for the inhuman siege of Mariupol. We know who you are, we hold you accountable, you are not getting away with this!”

In addition, the largest Russian bank Sberbank – which controls around 37 percent of the country’s banking sector – and other two other major banks in Russia are to be excluded from the payment system SWIFT. “This will hamper Putin’s ability to wage destruction”, said von der Leyen.

Moreover, consulting and accounting services provided by EU companies and individuals to Russian companies will be prohibited if the proposals are adopted by the 27 member states of the EU. The Commission president also proposed banning several “state-owned Russian broadcasters from our airwaves”. The measure would include a total ban for TV stations which she called “mouthpieces that amplify Putin’s lies and propaganda aggressively.”

Von der Leyen pledged economic and financial support to Ukraine. She said the Ukrainian economy was expected to shrink by 35 to 50 percent compared to 2021 and need around 5 billion euros every month just to keep afloat. The EU already said it would lift all duties and taxes on Ukrainian products imported into the EU single market.