The European Commission has stepped up in its protection of Ukrainians.

A month ago, on February 24, Russia began a military invasion of Ukraine causing more than 950 deaths of civilians. In the wake of the Russian invasion of Ukraine on 24 February 2022, more than 3.5 million Ukrainians fled their country and entered the EU. The European Ukrainians would be granted so called Temporary Protection, which means that unlike other asylum seekers, they would be free to move to any EU state they wanted, allowed to work and entitled to education, healthcare and other social benefits.

Should the EU treat all refugees like it is treating Ukrainians fleeing the war in their home country, including free choice of country of residence, permission to work, etc.?

The EU is now aiming to coordinate the efforts of its member states and has established a Solidarity Platform. Temporary protection gives access to basic rights to accommodation, education, healthcare and access to jobs. 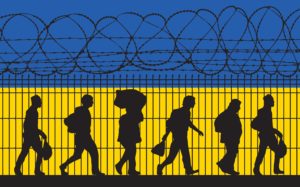 The European Commission announced that it would:

The United Nations estimate that children make up half of the arrivals, making it a big challenge to provide education, healthcare and adequate standards of living. The Commission has published multiple papers on the rights of Ukrainian refugees. It has unlocked funds for new arrivals.

Critics have questioned why a distinction is made between Ukrainian refugees on the one hand and asylum seekers from other parts of the world on the other. The main response has been that the closeness of the war is seen as a much more eminent threat because of the geographical implications of a conflict in Europe.

It will also remain to be seen if the wave of solidarity with Ukrainians will last as the Russians onslaught continues and up to ten million people might be forced to leave Ukraine. Online support all over the world has allowed an unprecedented support which might fade with time and lack of funding.

The European Commission has unlocked funding from the Erasmus + and Cohesion Policy funds for education, the Cohesion’s Action for Refugees in Europe (CARE) and the Asylum, Migration and Integration Fund for employment and the European Regional Development Fund for housing. Other European funds will be unblocked through various amendments, including the REACT-EU programme distributing €3.4 billion pre-financing payments to Member States closest to the border.