Like in the spring of 2020, the increase in Coronavirus cases has prompted several EU countries to partially close their internal borders. Are they allowed to do so? And what about external borders? We take a closer look.

Travel within the EU (internal borders)

Since the outbreak of the pandemic, the EU has aimed to keep its internal borders open as much as possible. Free movement of people is one of the pillars of the EU. However, during the first wave of the Coronavirus, many member states decided to shut their borders for non-citizens, with the exception of trade and cross-border workers.

After these travel restrictions were gradually lifted in the summer of 2020, member states pledged to coordinate any future restrictions and apply common criteria. Yet in February 2021, a new controversy arose after Belgium, home to many EU institutions, decided to ban all non-essential travel abroad, and Germany closed its borders to the Czech Republic and to the Austrian region of Tyrol.

Meanwhile, Finland introduced a  ban on all travellers coming for non-essential purposes, and Sweden does not allow people originating in Denmark, Norway, and the UK until the end of March. For its part, the Danish government has imposed control of all the country’s borders since the start of the Corona pandemic.

The European Commission is now pushing these and other countries to lift the measures and instead of bans work with recommendations.

Created in 1995, the Schengen Area offers the free movement of people within today 26 member states of the accords, 22 of which are part of the EU. Around 3.5 million people cross a national border each day to go to work. Since the 2015 migrant crisis, some member states have chosen to reinforce controls at the border, which has been condemned by the European Parliament.

The Schengen Borders Code establishes the difference between internal and external borders. Internal borders are defined as: 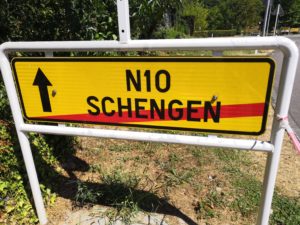 When can internal borders be shut?

Article 23 of the SBC states that the national police can still exercise its duties as long as it does not control borders and is not systematic. A member state can, however, legislate to impose on people entering the territory to be in possession of a paper or a document.

Article 22 of the Convention implementing the Schengen Agreement allows a member country to legislate on the obligation for a third-country national to report his or her presence on the territory.

More importantly, Article 25 SBC stipulates that for a limited amount of time and as a last resort, states can decide to reintroduce border controls at all or some parts of their internal borders.

This can be done if there is a threat to public policy or internal security of the member state, which can be interpreted to include threats to public health caused by a pandemic.

The newly introduced internal border controls need to be exceptional, limited to 30 days or for the foreseeable duration of the serious threat and up until six months, or up until a maximum of two years in very exceptional circumstances.

In the #GAC, I called on the Ministers to respect their 🇪🇺 commitments regarding travel restrictions. @EUCouncil has agreed on a coordinated approach on free movement to ensure proportionate measures & preserve essential travel.

We must continue going into this direction. pic.twitter.com/hS7eHtds0K

When a state wishes to introduce border controls, it has to notify the European Commission and other Member States at least four weeks in advance. The Commission can issue an opinion if it has concerns about the proportionality or neccesity of the measures.

Recently, Germany, Austria and Belgium decided to close their borders with the aim of reducing the number of Covid infections, especially those carrying virus mutation that have a higher infection rate.

The EU has a limited competence regarding health crisis such as the ongoing pandemic. The European Parliament and Commission can “adopt incentive measures designed to protect and improve human health and in particular to combat the major cross-border health scourges, measures concerning monitoring, early warning of and combating serious cross-border threats to health”, according to Article 168 of the Treaty of the Functioning of the European Union.

The Commission has made certain recommendations, which the Council – representing the member states – has endorsed. However, legally speaking, it is up to states to close borders if they deem the measure necessary.

At the end of January, the 27 member states agreed to elaborate a new map of at-risk zones. This map is run by the European Centre for Disease Control (ECDC). On the map, dark-red zones are those areas with the most cases (more than 500 infections per 100,000 people. While individual measures in place differ from one EU country to another, member states can impose on travelers originating from these areas a negative test and a minimum quarantine period.

The Commission has proposed to reduce largely non-essential travels but refrain from travel bans, where possible. However, some member states have gone beyond the recommendation. In Portugal and Belgium, all non-essential travel abroad is currently prohibited. Germany has reduced air traffic with a list of the most affected states and issued a ban on travelers coming from Czechia and parts of Austria.

Travel from outside the EU (external borders)

Different and much stricter rules apply for travellers arriving to an EU country or an EEA state from a third country. Since January 2021, this also includes the United Kingdom.

On 16 March 2020, the Commission adopted a communication recommending a temporary restriction of all non-essential travel from third countries into the EU for one month, which was further extended on 8 April, 8 May and 11 June 2020.

Hello! I'm afraid there hasn't been any word yet about the EU-wode travel ban. For up to date information, keep an eye on the Dutch Government and EU Commission websites. https://t.co/qRcfy4ZUKX https://t.co/uOgfgt4Svk

On 30 June 2020, the Council adopted a recommendation on the gradual lifting of the temporary restrictions on non-essential travel into the EU. Travel restrictions should be lifted for countries listed in the recommendation, with that list being reviewed and updated every two weeks.

On 25 January 2021, the European Commission proposed amendments to this recommendation, following the EU leaders videoconference of 21 January. The amendments are a coordinated response to the rise of infections and the risks posed by the more transmissible new variants of the virus within and outside the EU. They follow the recommendation by the European Centre for Disease Prevention and Control (ECDC) to avoid non-essential travel, in order to slow down the importation and spread of the new variants of concern.

The Council recommendation is not legally binding. The authorities of the member states remain responsible for implementing its content.

Under the new rules, epidemiological criteria should be used determine the countries for which the restriction on non-essential travel can be lifted. The criteria are:

In addition, particular information on aspects such as surveillance, contact tracing, containment, treatment and reporting as well as the reliability of available information and data sources and, if needed, the average score across all dimensions should be taken into account on a case by case basis, as should the question of whether or not the country in question takes reciprocal measures.

In countries where the epidemiological situation  worsens and, in particular, where a high incidence of variants of concern of the virus is detected, travel restrictions for non-essential travel may be reintroduced immediately. In the same circumstances, individual EU member states may also limit temporarily the categories of essential travellers. Travel justified by compelling reasons should still remain possible, the Commission recommends.

EU states should require persons travelling for any essential or non-essential reason, with the exception of transport and frontier workers, to have a negative PCR test taken at the earliest 72 hours before departure.

In addition, national rules may require self-isolation, quarantine and contact tracing for a period of up to 14 days, as well as further COVID-19 testing as needed during the same period. Quarantine and additional testing upon or after arrival should be imposed in particular to those travellers arriving from a third country where a variant of concern of the virus has been detected.

As regards essential travel, member states may decide, in a coordinated way, to waive some of the above measures in those cases where they would impede the very purpose of the travel. For transport personnel, seafarers and frontier workers, member states should not require more than a negative rapid antigen test on arrival. For transport personnel coming from a country where a high incidence of variants of concern is detected, member states may require a negative rapid antigen tests before departure.