“Free movement is one of the fundamental freedoms of the EU”, said the European Court of Auditors in its report.

The European Commission failed to properly scrutinise member states’ actions in closing their borders to other members of the Schengen Zone during the first part of the Corona pandemic. This is the main conclusion of a report by the European Court of Auditors (ECA) which was published on Monday (13 June 2022).

“We found that the member states’ notifications of internal border controls did not provide sufficient evidence that the controls were a measure of last resort, proportionate and of limited duration. The member states did not always notify the Commission of new border controls, or submit the compulsory ex post reports assessing, among other aspects, the effectiveness and proportionality of their controls at internal borders. When they were submitted, the reports did not provide sufficient information on these important aspects”, the Luxembourg-based supervisory body found.

Every EU citizen has the right to move freely within the territory of the EU. This is facilitated by the abolition of internal border controls in the so-called Schengen area. It comprises 22 EU states and the four non-EU countries Iceland, Liechtenstein, Norway and Switzerland. 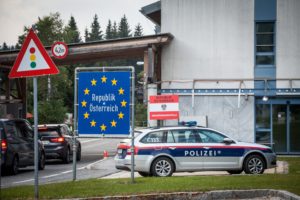 Austria is one of the countries that introduced border checks even prior to the Covid pandemic (Photo: Shutterstock)

However, the right to free movement can be restricted for public policy, security or health reasons. Since 2015, several EU countries reintroduced internal border controls in response to the migration crisis or to security threats. In 2020, in response to the Covid-19 pandemic, many Schengen states took measures to restrict freedom of movement. When doing so, they are however required to notify the European Commission. The EU executive remains responsible for assessing if the chosen restrictions comply with EU legislation and notably whether or not do not infringe the right of free movement of people.

The EU auditors reviewed all 150 such notifications submitted between March 2020 and June 2021. Of these, 135 related to the pandemic. The review shows that most notifications did not provide sufficient evidence to demonstrate that the border controls were a measure of last resort, or that they were proportionate and limited in duration. Moreover, the auditors criticized that the Commission has not launched infringement procedures in respect of long-term border controls that were introduced before the pandemic.

The lack of information from member states had affected the Commission’s ability to carry out a robust analysis of the extent to which the border control measures complied with the Schengen legislation. However, the Commission had neither requested additional information from the member states nor has it issued any opinion on the border controls since the Covid-19 pandemic began.

“Considering that the free movement of people is one of the four fundamental freedoms of the EU and has been at the heart of the European project since its inception, the Commission should have checked carefully that restrictions introduced during the Covid times were all relevant and justified”, said Baudilio Tomé Muguruza, the ECA member responsible for the audit. “We hope that our audit findings will feed into the ongoing debate on the review of the Schengen system.”

Tomé also said the Court of Auditors would soon look into how the Digital Covid Certificate scheme launched EU-wide in July 2021 to facilitate intra-EU travel had been managed by the European Commission.

The ECA considers itself as the “guardian of EU finances” and acts as an external auditor of the EU institutions. The ECA College of Auditors has 27 members – one from each EU member state. They are supported by around 900 staff members.