The EU border and coastguard force is under pressure over the behaviour of staff members. 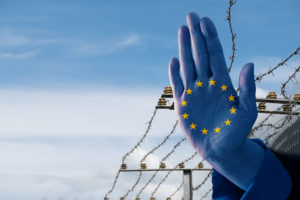 Emily O’Reilly, the EU Ombudsman, has again called on the EU’s border protection force to improve the internal handling of complaints and its accountability with respect to human rights. It was not the first investigation of its kind undertaken by the office of the EU ombudsman, which is an independent body.

In a decision published on Thursday (17 June 2021), O’Reilly said Frontex had only dealt with a very small number of complaints (22 until January 2021), and that none of these procedures concerned the actions of staff of the Warsaw-based agency.

During the six-month-long inquiry, which O’Reilly undertook at her own initiative, she tried to assess how Frontex implemented new rules, in place since November 2019, on its complaints mechanism and the Fundamental Rights Officer. The Ombudsman considered that the low number of complaints could be due to factors such as lack of awareness, fear of negative repercussions or lack of engagement by deployed Frontex officers who could play a more active role in transmitting complaints”, according to a press release issued by O’Reilly’s office.

📌The Ombudsman has made a series of suggestions to #Frontex to improve the accountability of its operations and to ensure that people know there is a complaints mechanism they can use if their fundamental rights have been breached https://t.co/SZeETNZLbE

The inquiry also documents the delays in implementing changes introduced in 2019, including the appointment of 40 fundamental rights monitors, as well as poor cooperation between the Fundamental Rights Officer and national authorities.

In recent months, the actions of Frontex came under intense scrutiny, and its Executive Director Fabrice Leggeri – a French national – was criticised by members of the European Parliament and Commissioner for Home Affairs Ylva Johansson. Frontex agents had allegedly pushed back migrants at the EU’s external borders, without giving them a chance to lodge an asylum application, which is illegal.

The European Parliament opened a formal investigation into the allegations. Leggeri has strongly rejected them. However, last week, Arias Fernández, a former deputy director of Frontex, told the British newspaper “The Guardian” that he was deeply worried about the agency’s damaged reputation, its decision to arm officers, and its inability to stop persons with sympathies for the far-right infiltrating its ranks.

Fernández was a contender for the post of Frontex executive director in 2015, but lost out to Leggeri. “Frontex pains me,” he told the “Guardian”, adding: “Especially for the staff, because they don’t deserve what they are going through. We saw the agency as an instrument to help the member states and the migrants. These events put a dent in all that effort. I do not believe that the agency has proactively violated the rights of migrants, but there are reasons to believe that it has turned a blind eye.”

To introduce more accountability and transparency, O’Reilly proposed that Frontex make it clear to its officers that they should accept and transmit any complaints they receive. Moreover, Frontex’s information materials should state that complainants would not be penalised for submitting a complaint.

The Ombudsman also asked Frontex to consider accepting anonymous complaints and to revise its rules to set out clear and unambiguous steps for dealing with complaints about violations concerning the rules on the use of force.

O’Reilly said that further inquiries into Frontex by her office were still underway.