Between 1.6 and 2.4 million euros are spent every year by private interests on lobbying the EU institutions.

More than a tenth of outside meetings by EU decision-makers concern the area of digital policy, while three of the top ten corporate spenders in Brussels are tech companies, according to a report by EU Transparency International (TI), an NGO that monitors lobbying activities in Brussels.

Google alone has declared an annual expenditure of €5,750,000 in the joint Transparency Register of the European Parliament and Commission, according to TI. Only around half of the 705 Parliament members publish the names of the organisations and individuals with whom they had outside meetings, the survey found.

On the Commission side, since 2014 – the year meetings with lobbyists were published on a regular basis – around 30,000 such meetings between officials of the EU’s executive arm and interest representatives were held. TI said that under the Commission headed by Ursula von der Leyen, which has been in office since December 2019, around a fifth of all lobby meetings concerned digital policy. Especially strong were the advocacy efforts undertaken by Big Tech companies Google, Facebook and Microsoft. 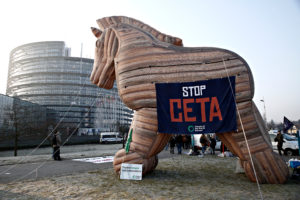 Protest against the Canada-EU trade agreement outside the European Parliament in Strasbourg in 2017. Photo: Shutterstock

TI further found that under von der Leyen predecessor Jean-Claude Juncker’s Commission, from 2014 to 2019, 84 percent of lobby meetings on digital issues were held with business interests, with the remainder encounters being between NGOs and officials.

Besides direct lobbying, companies also use their membership of associations, think-tanks and consultancies in Brussels to amplify their voice. Amazon, Apple, Facebook, Google, and Microsoft declare being members of a total of 66 such organisations, Transparency International said in the report. During the five years of the Juncker Commission, two fifths of all high-level meetings were on subject matters directly related to the digital single market.

A number of important legislative works were completed in the past six years, including the Copyright Directive and the General Regulation on Data Protection (GDPR). In the past 15 months, the share of meetings on digital policy dropped from 40 to 24 percent. However, given that the Digital Services Act and Digital Markets Act were presented last December, this figure might rise again in the near future.

Under the European Parliament’s new meeting transparency rules, which are partly mandatory and partly voluntary, 48 percent of MEPs have published a total of 12,794 lobby meetings, TI found. 52 percent of MEPs have not declared their outside meetings. Of the three main EU institutions, the Council – representing the interests of the 27 EU member states – is the only one with no obligation when it comes to lobby transparency.

TI also said that the rules governing so-called “revolving door” appointments of former EU politicians and officials to corporate roles, which are designed to prevent conflicts of interest, “appear to be largely ineffectual”.

A further dimension of EU-related lobbying concerns activities at the national and regional level, which seek to impact the stands governments take in Brussels. Not all EU member states have national lobby registers in place, and often, the link between activities in national capitals and in Brussels is not visible.

Call for centralised register and rules

Transparency International recommended that there be “a general and uniformly applied principle across all institutions, whereby policymakers (both elected and unelected) only accept meeting requests from lobbyists who are registered. Furthermore, the organisation wants lobby meetings “with all policy-makers, including phone calls and online meetings”, to be formally logged as such and everything published “on a centralised, searchable platform.”

The report is based on an analysis of publicly available datasets of lobby activity at EU level and in three countries (France, Ireland and the UK) at national level. In particular, TI analysed the EU Transparency Register, the database of high-level lobby meetings held with EU commissioners, members of their private offices (“cabinets”), and directors-general of the Commission, and lobby meetings published on the European Parliament website since July 2019, the starting date of the current legislature which saw new lobby transparency provisions enter into force.