A resolution in the European Parliament to trigger a rule of law mechanism had the required number of votes, says the EJC

The Hungarian government of Viktor Orbán has failed in its attempt to declare null and void an important vote in the European Parliament in 2018 which kickstarted a process to sanction Budapest over attempts to curtail the independence of the Hungarian justice system.

MEPs had voted by 448 in favour, 197 against and 48 MEPs abstaining to trigger a procedure under Article 7 of the EU Treaty, which could ultimately lead to Hungary losing its voting rights at the EU decision-making tables. 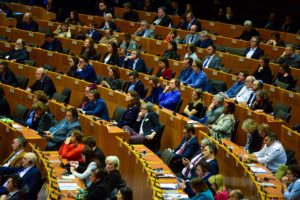 Hungary then lodged a complaint with the Court of the European Union (ECJ), arguing that lawmakers abstaining should have been taken into account as well for the calculation of the two-thirds majority which is required under the EU Treaty. This would have tipped the balance in favour of Hungary.

However, in its ruling, the Court in Luxembourg held that Parliament had followed the correct procedures. Abstentions did not have to be counted in determining whether the two-third majority has been achieved, the EU’s top judges ruled, and abstention could not be treated in the same way as a vote cast in favour or against a measure.

The court, sitting as Grand Chamber, noted that acts adopted by the European Parliament under Article 7 must not just have the support of two-thirds of members voting, but also that at least half of all MEPs must cast their vote in favour, as is specified in Article 354 TFEU.

The  ECJ judges held that the concept of “votes cast” had to be interpreted in accordance with its “usual meaning in everyday language” and that this covered only the casting of a positive or negative vote (i.e. yes or no) on any given proposal, whereas abstention – understood as a refusal to adopt a position – could not be treated in the same way as a “vote cast”. Consequently, abstentions should not be taken into account of abstentions. 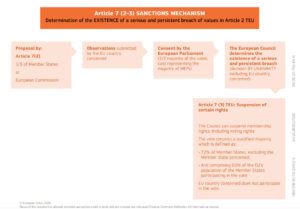 Hungary and Poland have so far been the only two EU states subject to an Article 7 procedure. Ultimately, the countries’ voting rights in EU institutions could be suspended. However, this is still a long way off and requires another vote in the Council, where the member states are represented and where all but the country concerned must vote in favour of sanctions. Both Hungary and Poland have pledged to support one another in the event of such a vote.