The first meeting of the European Political Community was held in Prague – it remains unclear how the new format will evolve.

The first-ever meeting of the European Political Community (EPC) was held in Prague on Thursday. The aim, according to an official EU statement, was to “foster political dialogue and cooperation to address issues of common interest.” In addition, the initiative is supposed to “strengthen the security, stability and prosperity of the European continent.”

An official said that the purpose of the exchange of the leaders of the 44 countries was to “listen to the different points of view” and seek to “identify delicate points in order to defuse tensions”. Among the invited countries, there is some suspicion that the EPC would serve as a replacement for EU enlargement. However, European Council President Charles Michel was quick to point out at the unveiling of the idea that “this initiative is in no way intended to replace enlargement.”

The idea for the EPC was officially floated in May 2022 by French President Emmanuel Macron but the roots of that kind of format go back decades ago. He received backing from fellow heads of state and government. 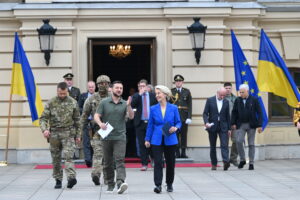 In addition to the 27 EU member states, the countries of the Western Balkans, the European Free Trade Association (EFTA), and the so-called Eastern Partnership (with the exception of Belarus) attended the Prague summit. The United Kingdom and Turkey were also present. UK Prime Minister Liz Truss received a green light to host an EPC meeting after Moldova and Spain. On top of that, Truss apparently wants the name of the initiative to be changed to “European Political Forum” in order to reflect its scope and purpose more clearly – and probably also to maintain her Brexit credentials at home.

The main topics during various roundtable discussions were peace and security as well as energy and combating climate change, EU officials said in advance. Meanwhile, the information by Czechia’s Europe Minister Mikulas Bek that Israel would be invited to participate in the meeting turned out to be incorrect.

The meeting was taking place on the eve of the informal European Council in Prague. Expectations were somewhat low regarding the purpose and future of the new meeting format. Experts and policymakers were unsure of whether this new “community” entailed new institutions or would just operate on an informal inter-governmental level.  “The French have often thought about Europe being divided into two parts. Look, if you build a new entity that is political and is outside the EU and its legal framework, you have two European Unions” said the former senior MEP Elmar Brok. 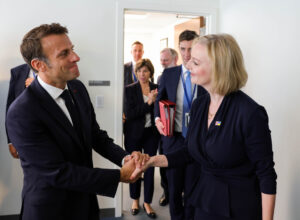 Former Polish foreign minister and current member of the European Parliament Witold Waszczykowski is also not convinced. He says that Macron’s idea is a “kind of trap for these countries” and that Western Balkans countries, Ukraine and others count on EU membership and “not on some sort of a new substitute institution.”

The opinions above and Truss’s wish to rename the project means that there is a real possibility that it could become just another European political gathering, i.e. a forum for meeting and discussion. Anything more, such as having institutions or being a substitute for the EU enlargement policy, is unlikely to be accepted by all countries involved. But Macron’s idea might be something else.

An attempt for ‘strategic autonomy’?

Bruegel’s policy brief made by influential people sees the European Political Community as a kind of “bridge to an eventual larger EU” but not a substitute for EU enlargement. The argument goes that a hypothetical EU of 36 members will be “entirely dysfunctional” in its current form because it would be “hobbled by veto rights, a bloated European Parliament, and a hopelessly fragmented executive.”

Therefore, the authors argue for a more ‘structured EPC’ than just a political gathering, but a ‘community’ founded on “soft law agreement” with equal standing for all of its members – and decision-making rules based on “rough consensus” and without any veto powers. 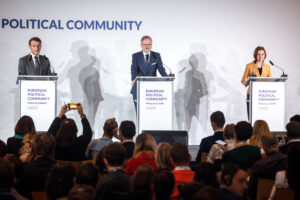 On the other side, ever since his speech in 2017 at Sorbonne University, Macron has used the term “strategic” multiple times – the latest being “strategic intimacy”. Macron has been trying to position himself as a leader of the European Union. In doing so, he’s been trying to press for “strategic autonomy” of the EU vis-a-vis other powers in the world. The EPC might be a part of that grand design.

Dubbed the “brainchild of Macron”, the EPC is seen as a step towards consolidating the geopolitical area of Europe with the European Union at its heart. The United States has so far not been part of the French president’s scheme, and it is unclear how the EPC’s agenda will overlap with that of NATO and the OSCE, which both have the US as a member country.

In light of Russia’s aggression towards Ukraine and the fallout of this war, the Prague meeting provided a place to try and iron out differences between different countries, as well as an opportunity to discuss the ongoing energy crisis. The leaders also tried to show unity against Russia and the looming energy crises.

The breakout of renewed hostilities between Armenia and Azerbaijan in mid-September, just two weeks after their leaders had met in Brussels, triggered the alarm. 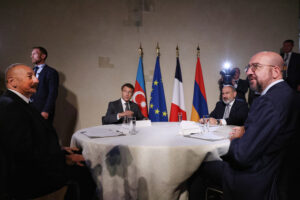 On 31 August, European Council President Charles Michel issued a press statement saying that Armenia and Azerbaijan had agreed “to step up substantive work to advance on the peace treaty governing inter-state relations between Armenia and Azerbaijan and tasked the Foreign Ministers to meet within one month to work on draft texts.”

During the EPC summit, a meeting took place between the two sides, together with Macron and Michel. Afterwards, both Armenia and Azerbaijan “confirmed their commitment to the Charter of the United Nations and the Alma Ata 1991 Declaration through which both recognize each other’s territorial integrity and sovereignty.” This would form the basis for the “work of the border delimitation commissions” that will take place at the end of October in Brussels.

For lasting peace in the Caucasus. pic.twitter.com/PTPAofLHHT

Aside from that, a two-month civilian EU mission alongside the border with Azerbaijan was agreed “in principle” (Charles Michel). It is to start at the end of October 2022. The aim is to “build confidence and, through its reports, to contribute to the border commissions”, reads a statement issued after the meeting.

Aside from the deteriorating security situation in the Caucasus, the EPC summit also tried to persuade Greece and Turkey, both members of NATO, to sit down and discuss the tense situation in the Aegean Sea and over Cyprus. “It is up to Turkey to choose if it will come to such a dialogue or not, but the basic ingredient must be a de-escalation,” said the foreign minister of Greece Nikos Dendias a few days before the EPC meeting

Reportedly, tempers flared during the discussions at the EPC. “Their entire policy is based on lies, they are not honest. We have nothing to discuss with Greece” said Turkish President Recep Tayyip Erdogan during his press conference in Prague. A softening of the rhetoric is not yet on the table. 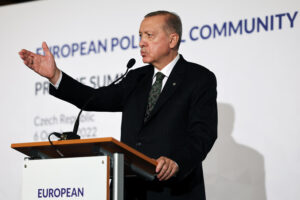 “No formal written outcome of the European Political Community is envisaged” Charles Michel’s invitation letter sent prior to the meeting stated. There was one concrete result, though: The countries are to meet again soon. The next EPC summit will be held in Chisinau, Moldova in six months’ time.