Poll: Citizens want to take part in debate on future of EU

The Eurobarometer survey found a surprising interest in the debate on the future of the European Union.

Ordinary citizens of the public want to be involved in the upcoming Conference on the Future of Europe. The forum is to discuss the reform of the EU and will launch in May, according to an agreement reach last week by the main EU institutions.

Ninety-two percent of those polled in a Eurobarometer poll said that the voices of “ordinary citizens” must be taken more into account when taking decisions relating to the future of Europe are taken. Six in ten Europeans said that the Coronavirus pandemic had made them reflect on the EU’s future.

A total of 27,034 people in all 27 EU member states were asked the same questions by different polling companies. The survey was already carried out in October and November 2020. Therefore, it does not take into account the recent discussions on the EU’s handling of the vaccine procurement.

Respect for democracy, human rights and rule of law is seen as the EU’s main asset #FutureofEurope

However, many of the results were nonetheless clear: A significant number of Europeans want the EU to develop a common health policy (32 percent), invest more money to find a treatment or vaccine to Covid-19 (30 percent) and establish a comprehensive European strategy for facing similar crises in the future (26 percent). To a lesser extent, citizens polled said that want Brussels to invest more money in the economy (18 percent), enforce stricter controls on the EU’s external borders (18 percent) or ensure there is an EU stockpile in place of medical equipment. Less than 10 percent of respondents said the principle of free movement of people between the EU member states should be reviewed. 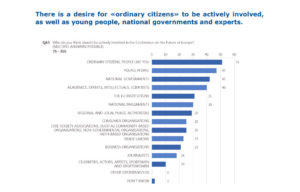 On the Conference on the Future of Europe, three quarters expressed hope that the event, which is to kick off on 9 May, will have a positive impact on democracy within the EU and mean progress for democracy. A clear majority endorsed this view in every EU member state.

Half of respondents said people from all walks of life should be actively involved and almost half expressed that young people in particular should have an important role in the gathering. To a much lesser degree, citizens want the involvement of business interests or other established organisations at EU or national level. A surprising number of those surveyed (51 percent) said they would like to get involved in the Conference themselves, with the Irish respondents being the most enthusiastic (81 percent) followed by Belgians (64 percent), Luxembourgers and Slovenians (both 63 percent).

Asked about the main positive aspects of the European Union, 32 percent mentioned the Union’s respect for democracy, human rights and the rule of law while 30 percent pointed to it being an economic, industrial and trading power.

Respect for democracy, human rights and the rule of law was ranked as the most important asset of the EU in 14 of the 27 countries. This viewpoint was especially prominent in Sweden where 58 percent of respondents saw it as a key asset. The EU’s economic, industrial and trading power was ranked as the most important factor in nine countries, above all in the north-east of the continent: in Finland by 45 percent of respondents and in Estonia by 44 percent. 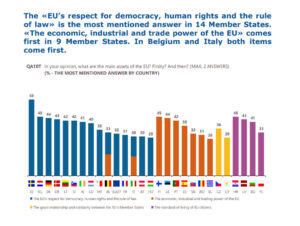 Climate change was mentioned as the main global challenge affecting the future of the EU, with almost one in two respondents selecting this as the main challenge.

The second and third most mentioned issues, cited by similar proportions of Europeans, were terrorism (38 percent) and health-related risks (37 percent). Migration and displacement came fourth; it was mentionned by just over a quarter of Europeans (27%).

Asked what was the most effective way to ensure the voice of citizens is heard, and presented with a range of possible answers, more than half of those surveyed said voting in European Parliament elections was. However, there is widespread support for EU citizens having a greater say in decisions relating to the future of Europe. Of the 92 percent of respondents who said they believed  EU citizens’ voices should be taken more into account, 55 percent said they “totally agree” whilst 37 percent answered they “tend to agree”. 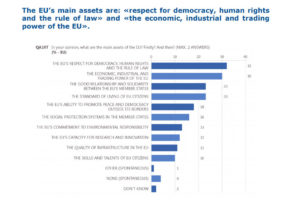 Respondents were asked to evaluate possible developments which they would like to see. Top of the list came “Having comparable living standards” (35 percent) and “More solidarity between member states” (30 percent). Around a quarter of respondents said they wanted to prioritise  comparable education standards and the development of a common health policy.

EU-wide survey shows Europeans support the launch of the Conference on the Future of Europe.

It was the 500th Eurobarometer survey done by the EU. The poll was commissioned jointly by the European Commission and the European Parliament. It was conducted face-to-face and completed with online interviews where necessary as a result of the pandemic.

Conference on the Future of EuropeEurobarometerOpinion poll